Law firm websites across the country make it all about them, but here, at my firm, I want it to be about you, because after all its your recovery and your heroic story that we want to be a part of, just like so many who did the same for me when I was very ill back in 2011.

To that end, on this page, I want to offer some meaningful books, movies and quotes that have had a meaningful and life-long impact on me.

Please do not hesitate to share books, movies or quotes that have impacted you that might serve someone else the same way. Simply go to the “Contact” section of our site and email me. I review each and every email that comes through our website and I would love to include your suggestions for others here on this page. 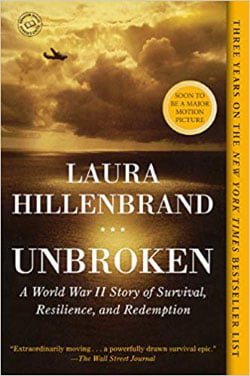 This book was given to me by my father-in-law as I lived in a rehabilitation unit learning how to walk again, after falling ill with transverse myelitis. There was plenty of down-time sitting in my hospital bed, and this book not only made the time go by fast, it was impactful. I could not imagine enduring that which Louie Zamperini, the star of the book, went through as a POW in World War II. His story gave me hope, strength and encouragement and I hope that it might do the same for you. 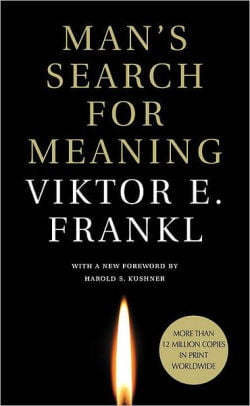 This book was given to me by a dear friend, who is nearly thirty years older than me.   I had never heard of the book before, but when I began reading it I could not put it down. The first half of the book is an eye witness account of the horrors of living in a concentration camp during WWII.  The author, Victor Frankl, survived Auschwitz, and his stories are absolutely horrifying and riveting.  The second half of the book is the author implementing what he learned about the human spirit in the concentration camp, and applying it to men and women whom he would treat as a professional therapist after the war ended, and the impact same had on the people he was helping.

I write about the vital principle and the condition of the human heart, mind and soul that has been said to separate the same two people between life and death. Although Frankl never specifically refers to the vital principle, the inherent will in some of us to survive, is a theme throughout his book.

The book is very intense during the first half covering the Nazi concentration camp, but necessary for the understanding of the second half of the book.

If you are intrigued by the human spirit and the will to live, I hope that this book may bring you the same impact that it has had on me. 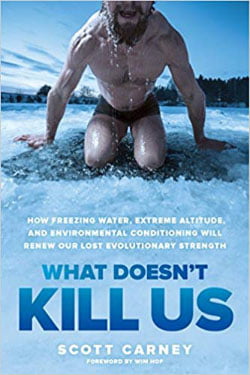 What Doesn’t Kill Us by Scott Carney

I was 15-years-old and I had thought I had swallowed a fire ball. My gut felt like it was on fire and it literally felt like the fire was coming up through my throat. I was in tremendous pain and had no idea what was going on with me. My mom, baffled by my condition, took me to the emergency room.

After several tests, the doctor gave me a pill and asked me to wait for an hour to see if the fiery sensation went away – and it did. It turned out I had had my very first (and quite intense) heartburn bout.

From that day forward until I was 40 years old, I remained on Nexium. I tried numerous heartburn medications, but Nexium was the only one that would give me consistent relief. If I didn’t take a Nexium, heart burn would return within 24 hours like clock work.

Today, I am off of Nexium and I do not take any medications. This book, What Doesn’t’ Kill Us, had the unintended consequence of stopping my need for Nexium.

The book chronicles the polish citizen, Wim Hof, who contends that through his cold exposure therapies and breathing exercises, he can jump start your immune system, as well as your neurological system. The author, Scott Carney, set out to prove that Wim Hof was a fraud, but after spending time with him, he became a believer of Hof’s methods himself.

I decided to give it a try. I started taking one to two freezing cold showers a day, and after a month of doing so, I realized I had forgotten to take my Nexium, and I had had no heartburn symptoms. And just like that, I became medication free.

This was particularly well-received by me, especially since I do ample drug litigation, and had recently seen the reports connecting PPIs (proton pump inhibitors like Nexium) to kidney failure.

The book was fascinating to me. There is a chapter on a man with Parkinson’s disease who could barely move, and began exposure in a nearby nearly frozen lake, and such efforts restored his ability to move. It is absolutely remarkable.

If you are on medication, any medication, give this book a try. You just might discover an unintended consequence, much like the one that I discovered. 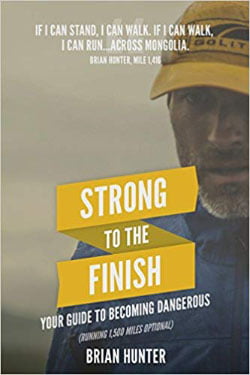 Strong to the Finish by Brian Hunter

A little heard of book, but a book with an enormous impact, is Strong to the Finish, by Brian Hunter. If you have come to the conclusion that you and/or your body is maxed out, and you can do no more, than this is the book for you.

Brian Hunter is a father of two, husband and man with no previous running experience who felt a calling by God to run across the entire country of Mongolia. This meant 60 days of more than a marathon each and every single day. And the craziest part – he did it.

His book chronicles the journey, but most importantly challenges the reader to question whether they have reached their own personal greatness as provided to them by God. Aside from his many life lessons I found wonderfully insightful, what stuck with me most is his conclusion, that we are all so much more capable of doing much more than we think we are. 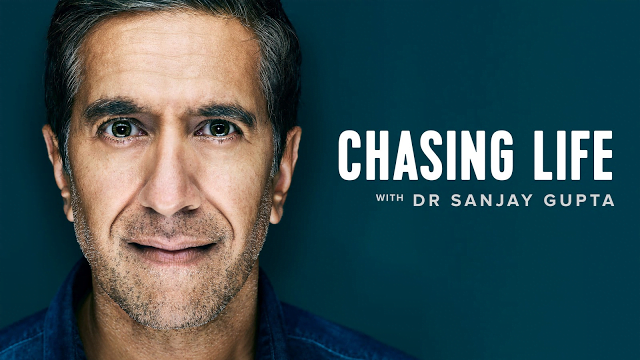 If you have Hulu or Nextflix check out Dr. Sanjay Gupta’s Chasing Life series. Gupta sets out on a quest across the world seeking the secret to longevity, health and humanity. His stories along the way are intriguing and insightful, so much so I blogged about them here. 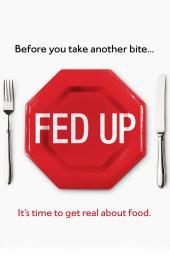 Fed Up. It's Time to Get Real About Food

A great documentary available on Amazon or Hulu regarding the inflammatory nature of sugar on the body, the way sugar is processed in the body (immediately to fat, unless equal amounts of fiber are present) and the way sugar is fast contributing to just about every metabolic disease spiraling out of control in our country today. A must watch if you are committed to health and taking care of your body. 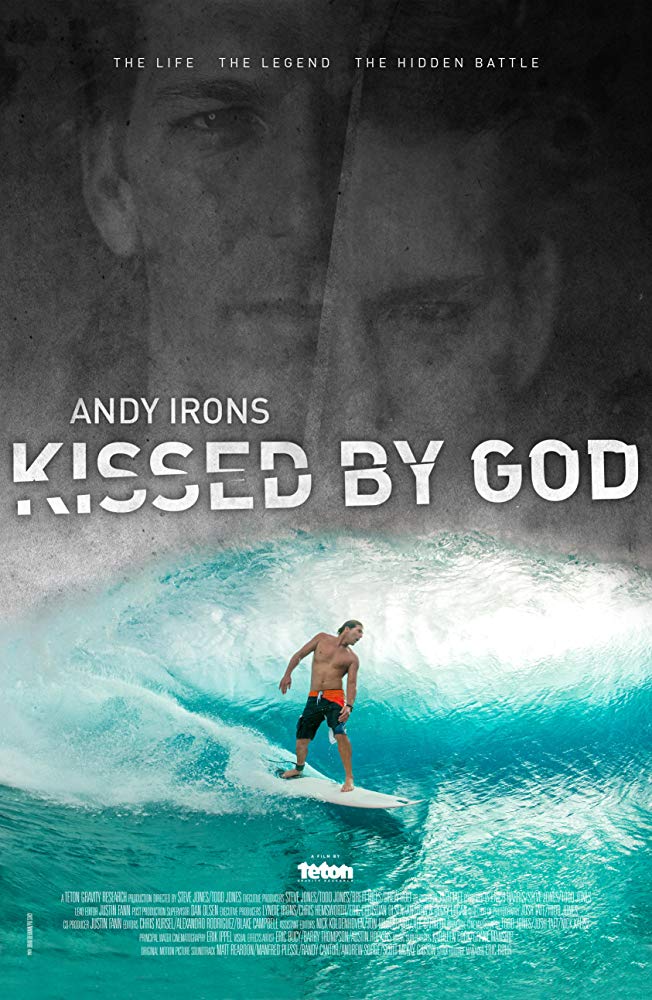 This remarkable documentary chronicles the much-too-short life of Andy Irons, the world champion of surfing in 2003, 2004 and 2005. Little known Andy Irons successfully knocked off superstar Kelly Slater for three years in a row for the top crown. At 27, Andy Irons died of a drug overdose, including various opioids. My firm is heavily involved in the nation-wide opioid epidemic representing cities and counties in Wyoming, Colorado, Kansas and Nebraska. We are committed to doing everything in our power to bring this epidemic to a halt as too many families are being destroyed, including the Andy Irons life cut far too short.

My firm sponsored a showing of Kissed By God in September of 2018 for the City of Laramie, Wyoming. My firm paid Teton Gravity Research, a great local film company who produced the film, to exhibit the file in Laramie making it free to each and every person who showed up. We chose Laramie because that’s where Wyoming’s only four-year University is located and we invited the entire city, the entire University and the entire athletic program. My hope is that the story of Andy Irons changed somebodies life that night for the better. If you or a loved one struggles with opioid or substance abuse addiction, you are not alone.

Run when you can, Walk if you have to, Crawl if you must.  Just never give up.  – Dean Karnazes

People who are crazy enough to think they can change the world usually do.  – Steve Jobs

May your trails be crooked, winding, lonesome, dangerous, leading to the most amazing view.  – Edward Abbey

Only those who risk going too far can possibly find out how far one can go.  – T.S. Eliot

Opportunity is missed by most people because it’s dressed in overalls and looks like hard work.  – Unknown

I have found that there are three stages in every great work of God; first, it is impossible, then it is difficult, then it is done. – Hudson Taylor